The Power of the Latina Vote

It is undeniable that the Latino vote had a tremendous impact on the election. Approximately 17.9 million Latinos are currently eligible to vote, 9.1 million of whom are women, and since 2004, the number of Latinos registered to vote has doubled.

Early exit polling suggests that Latinos overwhelmingly supported Obama, with 67 percent voting for Obama and 30 percent voting for McCain. According to the University of Massachusetts's Center for Women in Politics and Public Policy, Latinas have become increasingly engaged in politics, making up 5 percent of total voter turnout (Latino men made up 4 percent). Latino overall support for Obama became especially significant in the battleground states of Colorado, Florida, Nevada, New Mexico and Virginia; all of which have large and growing Latino populations, and all of which were carried by Obama. These statistics are just proof of the fact that the Latino vote matters more than ever before.

The Latino vote has led to the great strides for women and Latino candidates and increased their representation in the federal government. In 2008, Latinos ran in over 37 states across the country for both federal and state legislative seats. The 25 Latino members of Congress added another colleague to the list who will serve in the U.S. House of Representatives. The 111th Congress will include seven Latina Congresswomen from Florida, New York, and California. They’ll be joining the 64 re-elected incumbents in the U.S. House of Representatives.

The gains weren’t limited to the U.S. Congress either. State legislatures across the country had Latinos elected to seats in numbers never previously seen, particularly in Wyoming, Kansas, and Oklahoma.

Now that we have new leadership in place, we advocates, activists and organizers must rise to the occasion. We must take the momentum of this election to our everyday organizing and activism, placing women's ability to care and provide for their families at the center of our platform.

While the economy proved to be the top issue among the general electorate, Latinos also voted with immigration policy in mind. The Republicans’ divisive and xenophobic rhetoric about immigrants proved harmful for garnering support in the Latino community, which in the past has supported some Republican candidates. Senator McCain, who co-sponsored comprehensive immigration reform legislation in 2006, turned his back on the immigrant community during the campaign. He publicly stated that he would not vote for the same immigration bill that he once sponsored if it came to the floor for a vote in 2008. These harmful statements fuel the flames of hatred and blame towards immigrants and may have cost him the election.

Latinas can finally say ADELANTE, our time has come. Now the real questions face us. What does this new era mean? What do we want for our families and communities? What does a Latina agenda for reproductive justice and immigrant rights look like? To begin, the National Latina Institute for Reproductive Health has three top requests of the new administration:

1. Repeal the Hyde Amendment, which denies low-income women access to abortion services;
2. End the discriminatory, militaristic and inhumane immigration enforcement practices that are destroying our communities; and
3. Support an equitable and affordable plan for comprehensive health care for all.

What the Unmarried Women’s Vote Means

More than a week after an historic election, political analysts still are sifting through the results, trying to figure out how different segments of society voted, why they cast their ballots as they did, and what their political preferences and patterns of participation mean for the future.

But three lessons are inescapably clear: The electorate that changed America reflects a changing America -- younger, more racially and ethnically diverse, and less likely to be married. The largest demographic group within this new American electorate -- unmarried women -- played a pivotal role in electing Barack Obama as president, building a bigger margin for Speaker of the House Nancy Pelosi, and delivering the largest Democratic margins in national politics since 1964. And, for progressives from the White House to both houses of Congress, there is no more urgent challenge than addressing the needs of unmarried women -- especially for economic security -- and ensuring that they continue to participate in the political process.

In addition to voting in numbers reflecting their presence in the population -- 53 million in all and 26 percent of voting-age adults -- unmarried women delivered decisive margins for Obama for president and Democratic candidates for the U.S. House, Senate, and public offices at almost every level of government. These women favored Obama over John McCain by a stunning 70-to-29 percent margin, while preferring Democratic candidates for the U.S. House by 63-to-31 percent and for the Senate. In a dramatic indication of how heavily unmarried women supported progressive candidates, Obama’s overwhelming 70 percent share of unmarried women’s votes was even greater than his 66 percent showing among young voters and his 67 percent of Latino voters.

Even more remarkably, in spite of the fact that they overwhelmingly believe that the nation has been “on the wrong track,” unmarried women cast their votes in a spirit of hope and purpose, not anger and despair. Seventy-five percent of unmarried women agreed that “this election made me believe average people can help change the country.” For these women, change means addressing the most important challenge in their lives -- pervasive economic insecurity.

In many ways, these single, separated, divorced and widowed women really are “women on their own.” In an unstable economy, more than 40 percent have household incomes of $30,000 or less. In a discriminatory workplace, these women earn 56 cents for every dollar that a married man makes. In the midst of the healthcare crisis, these women are less likely than married people to have health coverage. In a society where it’s difficult to balance work and family, more than 10 million are single moms with children at home. And, when they are too old to work, about 25 percent rely on Social Security as their only source of income.

Now, these women are on their own in a housing crisis, a financial crisis, and a deepening recession. They are more vulnerable than married people to foreclosures, layoffs and bankruptcies. 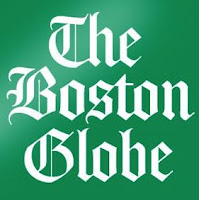 Today, the Boston Globe’s opinion-editorial page is comprised entirely of essays written by women. Since the Women’s Monitor began tracking its opinion pages, this is the first time the Boston Globe has run an op-ed page featuring only women. Back in March, we observed a similar occurrence in the New York Times, but only because the women were writing about Elliot Spitzer’s scandal. While an all-male op-ed page isn't an uncommon occurance, the all-woman day is so rare we always take notice. We applaud the newspapers for increasing the volume of women voices in the mainstream media and hope to see continued exposure.
The opinions by women in the Boston Globe take positions on a variety of pressing issues facing society. In response to a recent opinion in the New York Times, Jean Vennochi, a Globe staff writer, challenges Gov. Mitt Romney’s opposition to governmental aid for U.S. automakers. Vennochi notes his “calculated” political history and accuses him of taking the popular stance regardless of the issue.
Margot Stern Strom, the president and executive director of Facing History and Ourselves, addresses the issue of education reform and asks the new administration to consider a new idea. Strom argues that schools need to provide compelling subjects appealing to students’ interests. Additionally, teachers should be prepared to lead students in conversations about social discourse.
Also appealing to the new administration, Anneke Van Woundernberg, a Congo researcher at Human Right Watch, calls for world leaders to convene efforts to give aid and to relieve the crisis in Congo. And finally, Therese Murray, president of the Massachusetts Senate, and Steven Baddour, Senate Chairman of the Joint committee on Transportation, urges for transportation reform to take place in the form of addressing administration inefficiency and lift financial constraints on the MBTA and regional transit authorities.
Romney takes auto industry for a ride by Jean Vennochi
Education, Democracy and Rights by Margot Stern Storm
Taking on the crisis in Congo by Anneke Van Woundernberg
Transportation: reform before Revenue by Therese Murray and Steven Baddour
Posted by National Women's Editorial Forum at 3:03 PM No comments:

It’s Time to Look at the Way We Vote

More than 112,000 voters in Maricopa County were forced to cast provisional ballots on Election Day. That is 16 percent of those that went to the polls, well more than the margin of victory for several races and ballot measures. We still don’t know how many of those were counted.

Was the turnout 72 percent, or was it higher? We have no way of knowing for sure. A good number of registered voters went to the polls and left without voting at all.

Arizona has been labeled by Mother Jones magazine as one of the worst places to vote in America. Polling places frequently move. It is estimated that nearly 40 percent of polling places in Maricopa County have shifted locations during each of the last two major election cycles.

We have also instituted an ID requirement that confuses poll workers and voters alike. We place tremendous demands on the temporary workers that run our polling places, asking them to be the linchpins in our democracy, but barely giving them what they need to succeed. They receive two hours of training on every aspect of running a polling place, including setting up complicated equipment and making sure it runs properly; understanding and complying with federal, state and local laws; understanding what ID is needed for a regular ballot, when voters must cast a regular provisional ballot, when voters should be given a conditional provisional ballot, and how to properly process each ballot type.

Arizona needs to take steps to make the voting process easier for everyone. It’s time to consider appropriating the best practices from other jurisdictions around the country to avert problems that continue to disenfranchise voters here in Arizona.

Take the ever-shifting polling places. Every two years Arizona’s elections officials scramble to find schools, churches, or other private facilities that are willing to serve as polling places. Many Arizonans moved here from states where polling places never change—they are always located at neighborhood schools. Arizona voters are expected to check elections department mailings before every election to confirm where they should vote. But it’s easy to miss the small type ink-jetted onto the one sample ballot that all voters in a household must share. It’s also easy to miss the polling place notification card, which doesn’t look all that different from junk mail. Even voter registration cards do not include the names and addresses of voters' polling places.

If Arizona voters reach their correct polling places, poll workers sometimes have difficulty finding their names in the voter rolls. Or poll workers may mistakenly send voters to get more ID when they have sufficient ID to vote a regular ballot or a regular provisional ballot. One county in Washington doubled the length of poll worker training, increased poll worker pay, and required them to pass a certification test. They saw poll worker mistakes plummet.